When I first learned about afternoon tea about 15 years ago, my “home teahouse” The Faded Rose had dozens if not 100 teas on their menu. Upon discovering how many varieties of tea exist, newcomers to the world of tea can feel totally at sea when asked to choose one. I certainly was. So, in Destination Tea’s “Choosing Your Tea” posts, we will get familiar with one of the popular teas you may encounter on an afternoon tea menu (listed in full here).

As a bonus, we will also talk about this unique type of teaware: originally named a “tennis set.” As many tearoom owners and tea lovers know, good fortune sometimes falls into our laps when someone who has no desire to keep their inherited teasets asks if we’d like them. Yes, please! A friend of mine recently got a great deal on her new home by agreeing to clear out all the unwanted items the older couple left behind, which just happened to include these beautiful tennis sets. She offered them to me (thank you Jan!), but it was only when I brought them home and began washing them that I realized they were not made of china (aha!) – more on that later.

Why Darjeeling is the “Champagne of Teas”

As happens frequently in the tea industry, Darjeeling tea is named after the region where it is grown, in the foothills of the Himalaya Mountains in the Northern India state of West Bengal. Only a few dozen tea gardens in the Darjeeling hills are allowed to label their tea “Darjeeling.” According to TeaSource, Darjeeling tea plants grow at the highest elevation in the world, a unique climate with rare growing conditions including day-and-night temperature range, oxygen content in the atmosphere, and UV light exposure. Today, about 70% of Darjeeling gardens produce organic teas.

Vahdam Teas, who gifted us their Darjeeling Spring Tea, explains that Darjeeling “is usually harvested from the small-leaved Chinese variety of Camellia sinensis sinensis, while all other Indian Teas are cultivated using large-leaf Camellia sinensis assamica variety.” Nicknamed the “Champagne of Teas,” Darjeeling teas are usually black teas, made from the hand-plucked, newly grown leaves of the tea plant, sometimes referred to as a “fine plucking”: a set of two leaves and a bud (the youngest new leaf), as pictured below.

The True Cost of Darjeeling Tea

The Tea Emporium in Darjeeling reports that the first tea gardens were planted in these hills by the British in 1852, when Darjeeling was a “sparsely populated hamlet used as a hill resort by the army and the affluent.”

The tea industry in Darjeeling, like many formerly colonized areas of the world, continues to fall short in providing fair working conditions and quality of life to its workforce. Hierarchical roles are also based on gender. While men supervise or work in the production facilities, women are responsible for harvesting, baskets hanging from their heads as they bend to hand-pick tea leaves, earning about $2 dollars a day. Despite India’s Plantation Labour Act of 1951 — which entrusts plantation owners to provide education, healthcare, sanitation and employment for their workers — human rights violations remain prevalent. Younger generations have begun to clamor for rights to the land their homes are on, to help their families build generational wealth, spurning any measures to create communal housing for workers.

Caring about the People Who Make Darjeeling Teas

At a macro level, our Direct Sourcing model continues to create a long-term positive impact in tea growing regions in India. Direct sourcing eliminates the involvement of unnecessary middlemen and ensures that the producers get a higher realization for their produce, which in turn allows them to give higher wages to farmers as well as improve their living conditions through better facilities and amenities.”

Seeking out tea companies like Vahdam Teas, who invest in human rights initiatives for Darjeeling workers, is a small way that we tea drinkers can help. Also look for small tea growers and micro tea processors like Niroula’s Tea Farm, which give local growers a direct source of income independent of the tea plantation system.

Check out the work of the Ethical Tea Partnership. They recruit major tea brands, like Taylors of Harrogate, to fund their initiatives, such as “Community Development Forums (CDFs), made up of people from all aspects of tea estate life – from workers, young people and anyone who lives or works in the estate to management. The CDFs are successfully addressing issues workers themselves have identified as important to them. So far these have included lack of opportunities for women and young people, alcoholism, challenges accessing government schemes and improving children’s results at school. While issues may be shared across estates, responses are determined and rolled out by the individual CDFs.”

A “flush” indicates the new leaf growth harvested in a certain season. Because of differing weather conditions throughout the year, each Darjeeling flush has a different character, which ultimately affects the tea’s flavor.

As you can see, the Spring flush leaves from Vahdam have that “green glow” you find in that first harvest of the year, and the liquor is a light golden hue. It does have a light aroma and flavor that could be easily overpowered by adding milk or sugar. Although the whole leaves obvious in the Vahdam tea signal a high quality tea, I actually very much also enjoy F&M’s Darjeeling, whose broken leaves quickly steep a more robust brew. F&M recommends adding milk and I do use a splash in mine, along with a teaspoon tip of sugar. It’s delicious.

These long plates with indentation to hold a teacup became popular in the 1870s at the outdoor afternoon teas at Wimbledon, where the fashionable gathered, allowing spectators to stand and hold both their tea and finger foods in one hand. Thus, they were first dubbed “tennis sets.” Over time, they became known as “tea & toast sets,” and — as television became widespread in the 40s and 50s — “tv snack sets.”

I have always seen these produced in bone china, until now. This milk glass set made by Anchor Hocking in Ohio is trimmed in 22k gold, and based on the logo, was made in the 50s or 60s (no later than ’68). As a detail-oriented person, I love the star base of the teacup, mimicked on the plate’s base, and the scalloped plate edge. Perfect for a book club meeting or any social event where guests cannot sit around a dining table, these tennis sets act as mini trays for snacking with your cup of tea. They’d also work perfectly for a cream tea in a setting without tables. They are widely available at thrift shops, and on eBay and Etsy. Happy hunting! 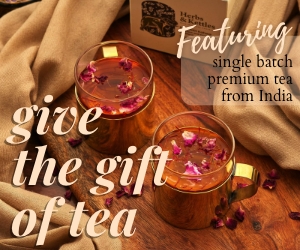