A varied tea list is cause for celebration, not consternation! With a bit of tea intel in your back pocket, you can happily navigate a tea menu to your satisfaction. Allow Destination Tea to formerly acquaint you with your choices…

Did You Know All Tea Comes from One Plant?

After water, tea is the most widely-consumed beverage in the world. All the world’s black, pu-erh, oolong, green, yellow and white tea comes from just one plant:  the camellia sinensis, an evergreen bush with dark green, leathery leaves, native to Southeast Asia. Known as “ch’a” or “t’e” in the East, teas are classified based on their processing, and sometimes named for the region where they were first harvested.

“It takes about five years for tea bushes to develop, but after that they can be harvested for fifty to sixty years. The flavor of the harvested tea varies from day to day, depending on the weather, soil and climate. that’s why blends are important, as they ensure some form of consistency. There are several thousand varieties of tea, and they vary around the world even from valley to valley. If a tea bush is on a sunny slope, its leaves will taste different from the leaves of one that is on a shady slope.

Just the very tip and top leaves of each branch go into making the perfect cup, and the best-quality teas are still harvested by hand across the globe in India, Pakistan, Nepal, Sri Lanka, parts of Africa, and parts of South America [and now the U.S.!]. If tea is picked mechanically, the coarser leaves and stems are often picked along with the tender leaves. These coarser leaves are manufactured — cut, torn, and crushed — to create powder that will brew quickly and be used to make tea bags or instant tea.” — Theresa Cheung, Tea Bliss. (San Francisco: Conari Press, 2007).

Excluding the tea plant (camellia sinensis), tisanes are any other herbal infusions created by steeping a plant part in hot or boiling water. Often naturally caffeine-free, these use any combination of a plant’s flowers, fruits, roots or leaves. Some common examples you may encounter include chamomile, mint, tulsi (holy basil), rose hips, hibiscus, ginger and the following: 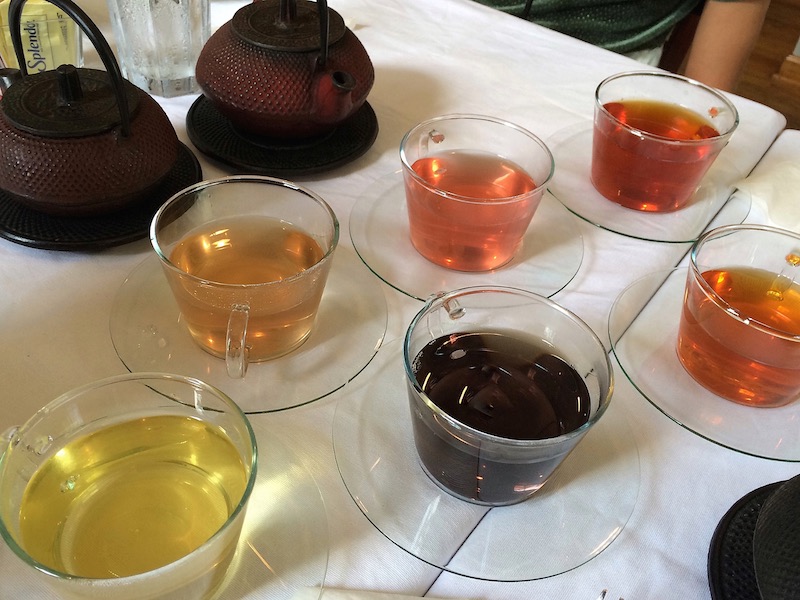 All teas are first “withered” by allowing plucked leaves to soften and wilt for several hours, while gently fluffing and rotating them. What happens next in the leaves’ processing is what determines the tea’s variety and flavor. All teas from the tea plant are naturally caffeinated, but unlike coffee, tea leaves also have “theanine,” an amino acid that helps slow the body’s absorption of caffeine.

White: Named for the silvery-white hairs on the unopened young leaves of the tea plant (called “buds”), this newest growth is air-dried, oven-dried or sunlight-dried, producing a pale green or yellow tea with delicate flavor and aroma

Yellow: Rare variety of tea produced only in China, processed like green tea by rolling while either being steamed or pan-fired, but under damp cloth to slow the drying phase and allow slight oxidation (when oxygen interacts with leaves), producing a more mellow taste than green tea

Green: Leaves are finger-rolled to prevent browning during steaming or pan-firing (tossing leaves in a hot, dry wok), producing a green or yellow tea with a toasty, grassy or mild vegetable-like astringency

Oolong (oo-long): The most time-consuming to create, processed over many hours or days by repeated pattern of rolling leaves to slightly bruise them and then letting them rest to oxidize (let oxygen interact with leaves); producing more complex flavor with smooth, soft astringency, rich in floral or fruity flavors

Black: The favorite of Americans; made within a day by rolling or crushing leaves and allowing them to fully oxidize before drying them, producing a hearty brew from deep red to dark brown color

Pu-erh (pu-ERR or pu-ARR): Produced only in China, finger-rolled over heat to dry, then pressed into cakes or stored underground for several years to ferment; very old, well-stored pu’erhs are considered “living teas,” like wine; prized for earthy, woodsy or musty aroma and rich, smooth taste

Familiarize yourself with these names to find your way to your favorites!

Assam: Black tea from a province in northern India through which the Brahmaputra River runs; rich, strong taste, ideal as a morning tea

Chai (rhymes with “pie”) or Masala Chai: Commonly drunk in India, a blend of black tea, milk, sweetener and spices such as cardamom, cinnamon, ginger, fennel seeds, nutmeg, cloves and pepper; produces a warming, soothing effect and acts as a natural digestive aid; the correct name of this drink is “Masala Chai” as “chai” simply means “tea”

Darjeeling: Renowned, premium black tea from small-leaf camellia sinensis sinensis, grown in the foothills of the Himalayas; picked during 5 seasonal harvests or “flushes” (the 1st and 2nd are most sought-after); light, fragrant tea known as “the champagne of teas”

Earl Grey: Named for a 19th-century Englishman whose household enjoyed black tea blended with oil from the rind of the bergamot orange; strong and fragrant

English Breakfast:  Traditionally a blend of Keemums (a fine grade of black tea from China), today the blend has evolved to include Ceylon and India teas; full-bodied brew

Kukicha: Known as “peasant’s tea,” made in Japan from remnants of green tea production after tea leaves have been deveined and destemmed; stems give the tea a sweet, nutty flavor, especially in toasted kukicha; also naturally very low in caffeine

Lapsang Souchong:  Black tea from China; smoky aroma, use a light hand if brewing at home

Matcha:  The only tea in which whole tea leaves are consumed; produced in Japan by shading tea plants several weeks before harvest to boost chlorophyll levels and sweeten the tea; leaves are stone ground into powdered green tea; used in Japanese tea ceremony; whisked to produce a frothy, vitamin C-rich drink

Orange Pekoe (pee-koh): A misleading name that does not indicate orange flavor; actually, a tea grading term, which signals the highest grade of whole leaf black tea; therefore, many black teas could be labeled Orange Pekoe; “Orange” label may have been bestowed by the Dutch East India Company to help them market black teas in the 1600s when the largest royal Dutch house was the House of Orange-Nassau

Purple:  A new cultivar of the camellia plant grown in Kenya, China, India and Japan; its high levels of anthocyanins result in purple leaves; can be processed into any variety (black, oolong, green, pu-erh, etc.); earthy, woody flavor with notes of sweet berries

Rose Hips: Herbal tea made from the cranberry-size red fruits that develop after roses fade, rich in Vitamin C

Russian Caravan Tea: A blend of black and oolong teas; gets its name from the long caravan that once carried tea from China to Russian nobility

Sencha:  Green tea from Japan; considered the purest of green teas because the leaves are rolled and steamed dry immediately after picking

Silver Needle or White Tip: White tea made of the silvery tips of leaves at the end of each branch; picked for a few days at the start of the harvest season; leaves are steamed dry, rather than fermented or rolled; mild, smooth, delicate taste

Yunnan: Green tea from Yunnan province in China; after initial fermentation, drying and rolling, undergoes a microbial fermentation process; not as strong as black tea, sweet aftertaste, improves with age 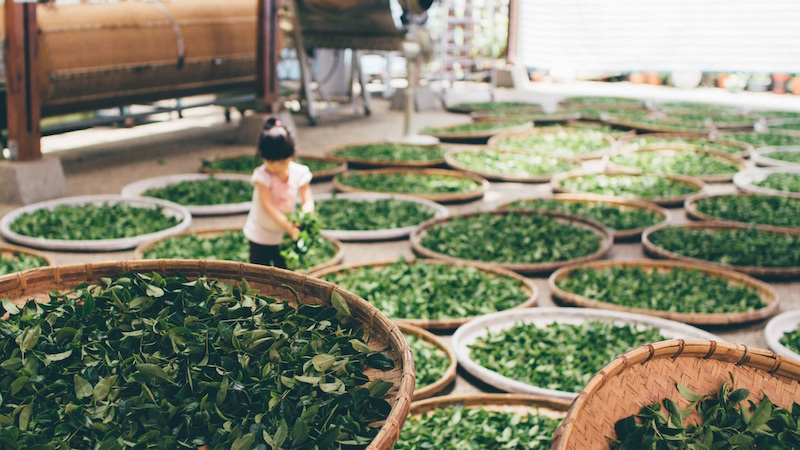 When discussing tea’s health benefits, often the focus is on the family of tea, for example, green tea over black tea. What we should be focusing on instead is the quality. Whole leaves, and especially buds, contain far more nutrients than the broken bits used in tea bags.”

Becoming a tea connoisseur? Check out the Tea Association of the U.S.A.’s succinct glossary of tea terms, including tea-tasting lingo.